Introduction to the ITIL 4 Update

The ITIL 4 Update is finally here! ITIL (the IT Infrastructure Library) is a framework for service management that originated in the 1980s with the UK government. In the last 30 years, ITIL has grown to become the ‘de facto’ standard for service management at almost every enterprise. Globally leading service providers, such as the Walt Disney Company, Mercantil Bank an Sutter Health, have all implemented ITIL Best Practices.

Throughout the past four decades, ITIL has gone through a number of revisions. Major updates included the introduction of ITIL V2 in 2001 (the Service Support and Service Delivery model) and ITIL V3 (the Service Lifecycle) in 2007. After more than decade, the new ITIL 4 Update was released.

ITIL 4 is the latest version of ITIL, and was published by AXELOS. AXELOS is a joint venture between the UK Government and Capita, a private equity investor. In its core, ITIL 4 consists of a series of books that describe the fundamental models an operating principles of ITIL. Around these ITIL books, a whole ecosystem exists of training, certification and technology providers. And this is perhaps the best description of ITIL: it is an ecosystem, and common way of working, for people in the service management industry.

ITIL 4 represents the latest – much required – update to ITIL. In ITIL 4, the process oriented nature of IT Service Management has been completely replaced. Instead, ITIL is now organized around the Service Value System (SVS) and the Four Dimension Model.

The ITIL Service Value System descries the chain of activities that is required to translate customer demand (depicted as opportunity) into business value. In order to create this value, ITIL 4 describes a number of activities, which together form the ITIL Service Value Chain. These activities range from initial planning, to delivery and support practices. In a way, it could be stated that the previous versions of ITIL are reflected in the ITIL value chain. 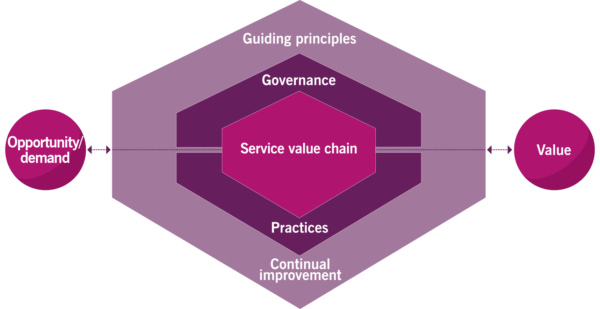 The Service Value System – reprinted with permission from AXELOS Ltd.

The second core mode of the ITIL 4 Update consists of the Four Dimension Model. In order to create business value – as we have just seen above – an ecosystem is required of different stakeholders. In today’s day and age, most organizations do not just create value by themselves. The work together with other stakeholders, and they are part of a system. For this particular reason, and in ITIL terminology, we say that the purpose of ITIL 4 is to “co-create” value for the business.

In the ITIL 4 model, the Four Dimensions models covers the following aspects:

For people who are familiar with previous versions of ITIL, it is not hard to see that the Four Dimension Model replaces the previously known 4P model of ITIL V3 (People, Process, Partners, and Products). 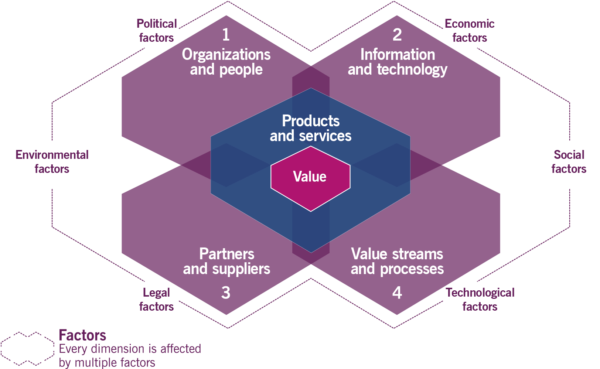 The Four Dimensions of ITIL 4 – Reprinted with permission from AXELOS Ltd.

By introducing the Service Value System and Four Dimension Model, ITIL 4 incorporate a more contemporary view on how services are delivered in modern organizations, whilst keeping through to its original roots of IT Service Management. Although some ITIL enthusiast claim that ITIL 4 can be used for complete digital transformations, it is still most suitable of it original purpose: to deliver quality IT services. The new ITIL 4 model accomplishes this objective.

Whether your organization is new to ITIL or has been working with ITIL for years, an important question is: Why ITIL? What is the business case, and why should organizations invest time, energy and resources to invest in ITIL certifications, implementation and tools?

The most important element, which also constitutes the business case, is stated above: ITIL constitutes the ecosystem for everyone in the service management industry. Service Management technology is built and designed around ITIL models. Processes and models in large organizations have been built around ITIL models. Even job roles in service management have been built around ITIL models. Someone who has never heard of ITIL, might wonder what the difference between an “Incident Manager” and “Problem Manager” might be. For people who know ITIL, this difference is abundantly clear.

And this brings us immediately to one of the most important aspects of the Business Case for ITIL 4: a common terminology and lingo for an industry just works. It reduces mistakes and improves communication between people. In doing this, it enables innovations, speed and quality of services. Although this is a highly unquantifiable aspect of ITIL, it forms a large part of the business case.

So why ITIL 4? The better question is why ITIL? ITIL represents the common principles, practices and language of service management. If you are working in this domain, it helps if you have basic understanding why processes are designed in a particular, why your ticketing systems have been designed the way they are, and why incidents are different from changes. Does it greatly matter whether this language is called ITIL V3 or ITIL 4? No, but ITIL V3 is fading out, so it just better to keep up with the latest thinking and developments in the service management industry.

What Is ITIL 4 Certification?

Very closely coupled to ITIL is the ITIL Certification Scheme. The certification scheme tests people’s knowledge about the content in the ITIL publications. It is a uniform way for organizations to drive adoption and implementation of ITIL in the organization, because they can send their people to training courses. As a result, ITIL certifications have grown to become almost mandatory requirement for people in the service management industry. 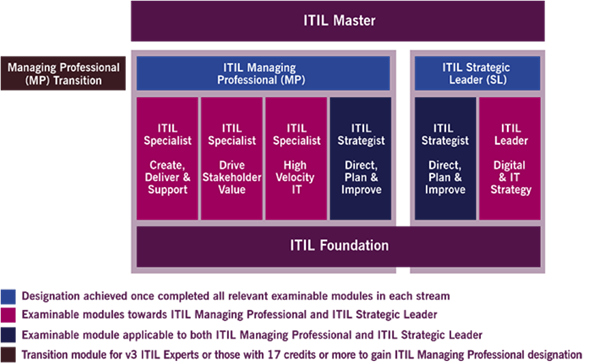 The ITIL 4 Certification Scheme – Reprinted with permission from AXELOS

The New ITIL 4 certification scheme consists of a number of certifications, which can be summarized in four levels:

Before we start discussing how you can move from ITIL V3 to ITIL 4, it is important to note that current ITIL V3 certifications will not expire, and that they will keep being recognized in the future. However, the intention of AXELOS is to slowly phase out ITIL V3. At this moment, it is not quite certain yet when the ITIL V3 exams will be stopped being offered, but this will definitely happen over the course of the next few years. It is therefore better to make the step to ITIL as quickly as possible.

To participate in the ITIL 4 Managing Professional Transition course, you should have any of the two requirements below:

The ITIL 4 Managing Professional Transition will be available for a limited period of time, but it is currently unknown exactly for how long.

How to study for ITIL 4?

Are you aiming to get ITIL 4 certification and wonder how best to study for it? There are a number of options available, depending on your learning preferences.

If you are an avid reader, you can also just buy the book from the Axelos website and purchase an online exam voucher. In the end, the book contains all the knowledge that might be tested on the exam.