The Transition to Industry 4.0

The modern industry has seen substantial advances since its most earliest forms at the beginning of the industrial revolution over 200 years ago. For centuries, mostly everything from weapons to tools, from food to clothing and housing were all manufactured by hand. With the introduction of manufacturing processes, the way humans produced goods completely changed. After this, industries realised exponential progress from Industry 1.0 to the upcoming – Industry 4.0. Here we discuss the outline of this evolution.

Figure 1: Transformation of industries over time

In the 1800s, water- and steam-powered machines were developed to aid workers. As production capabilities increased, business also grew from individual cottage owners taking care of their own — and maybe their neighbours’ — needs to organisations with owners, managers and employees serving customers.

The late 18th century introduced mechanical production facilities to the world. Water and steam powered machines were developed to help workers in the mass production of goods. The first weaving loom was introduced in 1784. With the increase in production efficiency and scale, small businesses grew from serving a limited number of customers to large organisations with owners, manager and employees serving a larger number.

Industry 1.0 can also be deemed as the beginning of the industry culture which focused equally on quality, efficiency and scale.

The beginning of 20th century marked the start of the second industrial revolution – Industry 2.0. The main contributor to this revolution was the development of machines running on electrical energy. Electrical energy was already being used as a primary source of power. Electrical machines were more efficient to operate and maintain, both in terms of cost and effort. Water and steam based machines which were, in contrast, inefficient and resource hungry. The second industrial revolution also saw the introduction of the first assembly line, as seen in the image above. Henry Ford helped streamline the process of mass production. The mass production of goods using assembly line became the new standard across many industries.

This era also saw the evolution of the industry culture introduced in Industry 1.0 into management program to enhance the efficiency of manufacturing facilities. Various production management techniques such as division of labour, just-in-time manufacturing and lean manufacturing principles refined the underlying processes leading to improved quality and output. 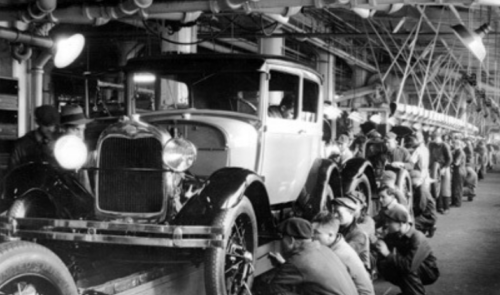 Industry 3.0 is the bridge between Henry Ford’s direction towards greater productivity and the intelligent processes that we are now witnessing arise under Industry 4.0. Not only were manufacturing processes streamlined, but automation made important parts of the production process safer and more efficient. Increased safety and efficiency meant greater worker productivity, less workplace-related accidents and more output.

Industry 3.0 was formed and encouraged by the advances in the electronics industry in the last few decades of the 20th century. The incorporation of electronics hardware into the manufacturing systems also created a requirement of software systems to enable these electronic devices, which meant the software development market boomed as a result as well.

The pressure to further reduce costs forced many manufacturers to move to low-cost countries.

The boom in the Internet and telecommunication industry in the 1990’s revolutionised the way we connect with each other and exchange information. It also resulted in massive changes in the manufacturing industry and traditional production operations merging the boundaries of the physical and the virtual world.

The Industry 4.0 uses Cyber Physical Systems to share, analyse and guide intelligent actions for various processes in the industry to make the machines smarter. These smart machines can continuously monitor, detect and predict faults to suggest preventive measures and provide solutions based on historical data or new ones as well. This allows systems and networks to be better prepared and ideally lower downtime for companies and organisations alike.

The same dynamic approach can be translated to other aspects in the industry such as logistics, production scheduling, optimization of throughput times, quality control, capacity utilisation and efficiency boosting.

Cyber Physical Systems also allow an industry to be completely virtually visualised, monitored and managed from a remote location and thus adding a new dimension to the manufacturing process. Think of all the retail websites online that do not have brick and mortar shops or warehouses. They operate 100% virtually thanks to cyber physical systems.

It puts machines, people, processes and infrastructure into a single networked loop making the overall management highly efficient and more streamlined for every party involved.

Where does Service Automation belong?

If we refer back to Industry 3.0, we can see that automation was already being introduced into various manufacturing and production processes. It enabled greater efficiency, more safety and greater production outputs.

Industry 4.0 saw the introduction of smart systems, like the Internet-of-Things and Big Data. With these factors included, companies and people saw the opportunity of automating more than just manufacturing processes, but services, too. Uber is a great example of this as they took a simple service, taxis, and automated it to the point where it has disrupted the taxi industry on a grand scale.

The concept of delivering services through smart technology – is a rapidly growing area of interest for most organisations. Companies such as Spotify, Netflix and Uber (who deliver 100% automated services) have proven that organisations can achieve rapid growth and gain a competitive advantage by relying on service automation.

The advancements in data and powerful analytics mean that the systems in place can trawl through the huge sets of data and produce insights that can be acted upon quickly. These insights enable us to improve on customer feedback, behaviours, and create new ideas entirely.